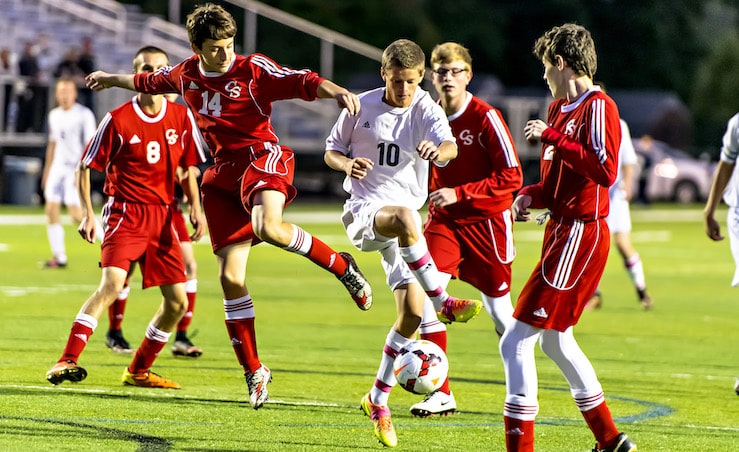 The Louisville Leopards Boys Soccer Team concluded the regular season with a road victory against the host Canton South Wildcats Tuesday Night at Clyde Brechbuhler Stadium. With the victory, Louisville finishes 4-2-1 in the NBC and finish the regular season an even 7-7-2 overall record heading into the postseason.

Bailey Adams scored 4 goals and had an assist to lead the Leopards offense. Hunter Foley scored a pair of goals to go along with 3 assists. Logan Rich also scored his first career goal to round out the Louisville scoring.

All seven of the Leopards goals were assisted. Derek Zeller also notched a pair of assists and Riley Adams recorded another for Louisville.

Adams performance earned him his 9th career hat trick, which eclipses Logan Henkel’s previous mark of 8 (2007-2010) for the new school record. It is also his 4th hat trick of the 2017 campaign which ties him with Kyle Baker for the single season record. Adams now has 26 goals on the season and a school record 58 for his career. His assist was also the 32nd of his career, which is also a new school mark.

With the victory, the Leopards have now defeated the Wildcats in 15 consecutive matches. Louisville leads the all-time series 15-3-1, which includes a 7-2 record in games played at Canton South. This is the Leopards final game in the Northeastern Buckeye Conference as they finish with an all-time winning mark for the league at 56-55-12.

UP NEXT: The Leopards will next host the winner of the #11 Seed Cloverleaf Colts at #6 Tallmadge Blue Devils in the DI Medina Sectional Finals on Saturday, October 21 at 3:00 PM.