The Louisville Leopards scored 17 unanswered points in the fourth quarter to turn a one score contest into a convincing 33-8 victory over the host Canton South Wildcats back on October 1, 1971.

The Leopards built a 16-0 halftime advantage, but the Wildcats cut the lead in half during the third quarter. Quarterback Scott Christensen hit Mike McGrew for a touchdown strike and Rick McGrew ran for the two-point conversion. The score would remain 16-8 heading into the fourth quarter.

Louisville would score three times in the final period to take the game. First, Ken Kuhn booted through a 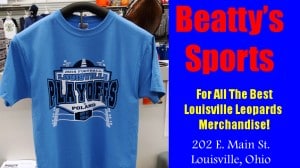 21 yard field goal to put the Leopards ahead 19-8. Earlier in the second quarter, Kuhn ran for a 7 yard touchdown and also made two extra point kicks.

However, it was Halfback Dave Mazzan that stole the show on offense. Mazzan paced the Leopards rushing attack by carrying the ball 10 times for 96 yards and 2 touchdowns. His 5 yard scamper in the fourth quarter put Louisville in complete control at 25-8.

Hobie Baker would later rip off a 44 yard touchdown run for the Leopards to put the final nail in the coffin. Baker also rushed for 71 yards on 9 attempts as Louisville out-rushed Canton South 237-58. Barry Emerick also scored on a conversion pass from John Doerschuk.

The Leopards defense would hold the Wildcats to just 91 total yards (58 Rushing, 33 Passing). Louisville’s defense also produced the only points of the first quarter when Rob Hackley tackled Rick McGrew in the endzone for a safety. The victory improved Louisville to 4-0 on the season.