On October 16, 1992, Brian Beatty ran for 151 yards and scored two touchdowns to help lead the Louisville Leopards to a 28-12 victory over the host Dover Tornadoes.

The Leopards spotted the Tornadoes a first quarter touchdown when Pete Kuczirka ran back an interception 42 yards for a touchdown to make it 6-0 Dover.

However, the Leps answered back in the second quarter on a double option touchdown run. Quarterback Jon Aljancic gave the handoff to Bob Burick, Burick pitched to Beatty, and Beatty ran 3 yards for the score. With Aljancic’s extra point, Louisville took a 7-6 lead.

The Leopards found the endzone twice in the third quarter. Less than two minutes into the second half, Louisville’s Jason Sivy picked off a 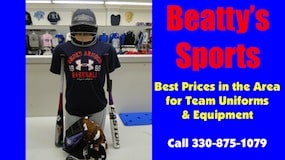 Dover pass and returned it 30 yards for a touchdown. Not long after, Aljancic found a wide open Burick for a 66 yard bomb to give the Leps a 21-6 advantage. Aljancic finished 5 of 12 passing for 109 yards.

The Tornadoes made things interesting by tallying another touchdown in the fourth quarter, but a failed conversion attempt allowed the Leopards to keep a two score advantage at 21-12. Later, Beatty broke free for a 73 yard rushing touchdown to hammer home the final nail in the coffin.