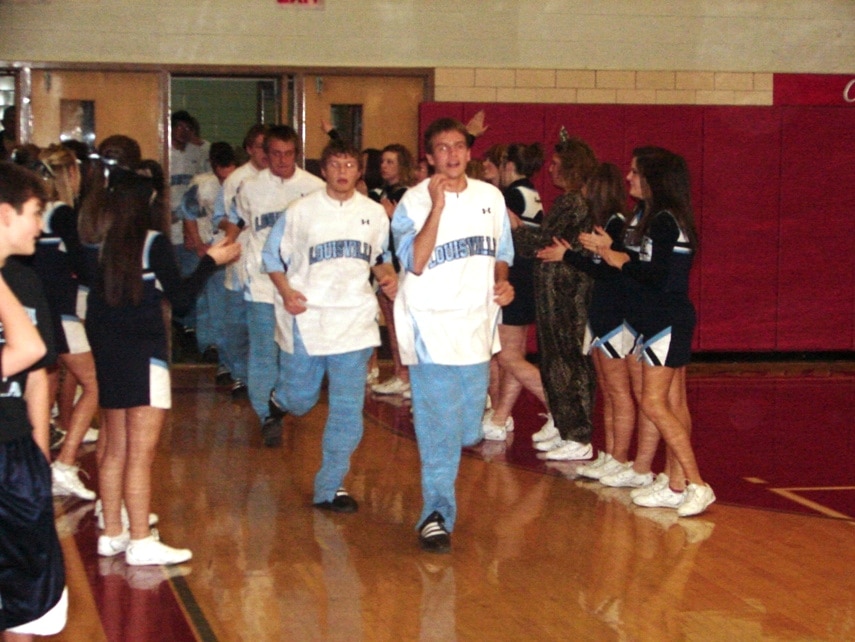 Canton South hit 5 of their 9 three-pointers in the fourth quarter, but Louisville survived for a 64-59 victory over the Wildcats at Charles “Red” Ash Gymnasium Tuesday Night.  Rocco Buccasso and Owen Gramoy each scored 17 points as the Leopards got their fourth straight victory after starting out 0-2.

All night long the Leopards jumped out to controlling leads, and all night long the Wildcats would answer with a flurry of points.  As Gramoy hit his 6th and 7th free throws of the night giving Louisville a 64-59 lead with 10.1 remaining, Leopard Nation still may have been wondering if that was enough to put away the Wildcats.

The Leopards jumped out to a 43-40 lead at the end of three quarters, but only because an Ethan Gallion swished NBA range three-pointer did not leave his hand in time.  Thanks to takes by Gramoy & Toby Minster and a three-pointer by Mitch Sluss; Louisville opened up the fourth quarter on a 7-0 run and eventually took a commanding 54-45 lead.

Louisville tried to stall on offense, just as they did when they played at New Philadelphia, but miscues allowed South to regain possession and they took advantage.  In a forty second span Gallion hit another deep three for South, Minster missed an easy layin for the Leps, and Armand Fontes buried a three to cut the lead to 54-51.

A few possessions later, Louisville had to throw an inbounds pass from under the hoop all the way to mid-court.  Sluss jumped up, snatched it, and ran by the over-pursuing defenders into the lane for the score.  But, South answered right back with an inbounds play of their own.  Fontes got open, caught the inbounds pass and swished a trifecta from the corner, 57-54.  Michael Schooley answered with a tough take to the hole to give Louisville a five point advantage.  Just when you thought South couldn’t possibly answer again, they worked the ball around and found Fontes in the right corner for his 4th three-point field goal of the quarter.  Fontes finished with a game-high 21 points.

On the ensuing possession, Schooley was a clutch 2-for-2 from the charity stride to give the Leopards a two possession advantage.  Louisville thought it best to foul South before the inbounds in a bonus situation, but James Lucas made them pay by hitting both free throws to cut the lead to two.  The battle from the free throw line continued with Sluss, who clanked the first one sending shivers down the spines of the fans from the Ville.  Sluss hit the second one though to give the Leps a 62-59 advantage with 33.1 seconds remaining.

The Leopards defense forced two bad shots by South, before Gramoy grabbed the rebound and was fouled with 10.1 remaining.  Gramoy hit both free throws to seal the deal.

The game was a battle from the outside, as well as from the free throw line.  The two teams combined for 16 made three-pointers and 32 free throw attempts.  Louisville was 15-of-20 from the stripe, while the Wildcats shot 83% in making 10 of 12.

South took a 33-30 lead into the half after Eric Thomkins turned a missed three-pointer into a put-back layup just as the horn sounded.  Louisville came out of the intermission with a 9-0 run in large part because of made free throws, but South came right back cutting the lead to 43-40 before the quarter ended.

NEXT GAME: The Leopards travel to Barberton to play the Magic in the Greynolds Classic on Tuesday, December 28. Tip-off is scheduled for 8:15 PM. Louisville jumped out to a 12-0 lead, but South answered right back with 11 straight points and trailed only 18-17 to the Leopards at halftime.  The Leps opened up a six point lead heading into the fourth, but South kept it within 36-29 before Louisville went on a 13-2 run in the final 2:05 to salvage the win.  Trevor Meredith led all scorers with 14 points and Billy Lairson added 8 in helping the JV team go to 6-0 on the season.  Kyle Deckerd paced the Wildcats with 11.

NEXT GAME: The JV hosts Akron Springfield at 12:00 on Thursday, December 30, Varsity will NOT follow this game as they are playing in Barberton later that night.