Louisville held visiting Canton South to only 135 total yards and 8 first downs during a 34-15 victory back on September 13, 2002.

Both teams came into this NBC opener 3-0 and the Leopards held a competitive 14-9 lead at halftime.That’s when the Louisville defense took over and turned out the lights. They held Canton South to only 41 yards and 1 first down the entire second half.

“Its always the same thing, the offense always brings the fans in and the defense wins games,” Leopard Head Coach Paul Farrah said of the outcome. “They have a lot of pride. They don’t want any press. They just want to play football and win.”

Louisville Cornerback Marc Zustin caught half of the six passes the Wildcats threw. One of his team 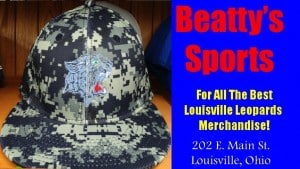 record three interceptions was a 40 yard pick six that put the Leopards up 20-9 in the third quarter. Zustin’s touchdown was setup by pressure up front. Linebacker Matt Herbert recorded a sack the play before to force Canton South into a 3rd-and-9 the play before. Defensive End Bryan Jones, who tallied 2 sacks in the contest, provided the pressure on Zustin’s big play.

While the defense dominated we should not overlook the Louisville Offense that produced 385 total yards. Runningback Curtis Elsass led the Leopards with 27 carries for 221 yards and three touchdowns. Elsass scored on runs of 1 and 58 in the first half and also provided a back-breaking 39 yard run in the third quarter.

“When we see five or six in the box, Curtis is going to get the football,” Farrah commented on his Senior runningback. “And what’s nice about this team, (Justin) Boudler doesn’t get the ball much and he didn’t say one thing. They just want to win.”

Boudler did finish with 2 catches for 27 yards. Quarterback Gary Whaley also ran for a 10 yard touchdown in the fourth and threw for 112 yards.

The Wildcats scored via a Ronnie Bourquin 4 yard run and a safety in the second quarter to get within a touchdown before halftime. Their only other score came late via a 9 yard run by Derek Brown.