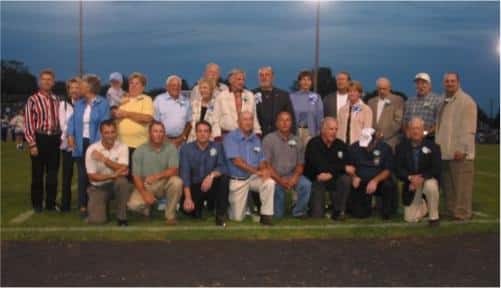 Brian Beatty – A 1993 graduate, Brian was a three-year, two-way starter on the Leopards’ football team. He was a first team All-Ohio selection, the 1992 WHBC Stark County Most Valuable Player and The Canton Repository Player of the Year. He was the Northeastern Buckeye Conference Player of the Year and the Akron Beacon Journal Offensive Back of the Year. He also lettered three years in basketball and four years in baseball. He earned a football scholarship to the University of Louisville where he was a two-year letter winner for the Cardinals

Dennis Biery – This 1961 graduate is the owner of Biery Cheese. He was the first Louisville athlete to qualify for the state-wrestling tournament. He was the construction manager and chairman of the Louisville Field of Dreams, the Diamond of Dreams, the concession building the outdoor batting cage and the storage building. In addition, Dennis was a supporter of the reconstruction of the running track and has supported the athletic program for Louisville High School for over 35 years

Tom Chlebeck – A 1966 graduate, Tom is a former player, teacher and coach for the Leopards. He was the 1965 WHBC Stark County Most Valuable Player and a North-South All-Star Football Game participant. He set single game records for rushing yardage and points scored. He received football and baseball scholarships from the University of Cincinnati where he lettered in both sports.He was the MVP of the Bearcats baseball team in 1970. He was a head coach in both baseball and fast pitch softball for Louisville and an assistant coach in football.

Bob Gladieux – A 1965 graduate, he was a three year letterman in football, basketball and baseball. He broke the Ohio high school football scoring record with 196 points his senior year. He was selected the 1964 WHBC Stark County Most Valuable Player.Also in football, he was first team All-Ohio, a Parade magazine All-American and the Veterans of Foreign War Outstanding Ohio High School Athlete. He played for a national championship team at Notre Dame and also played 7 years of professional football. He had both his football and basketball numbers retired at Louisville.

Greg Graham – He was a 1973 graduate. Greg won three varsity letters for the Leopards’ basketball team. He was a two-time first team all Federal League selection. In 1973, he was the Federal League MVP, first team Akron Beacon Journal, first team Alliance Review, first team Northeastern Ohio and an honorable mention All-Ohio player. He earned a basketball scholarship to the University of Oregon where he earned four letters. He returned to Louisville as a teacher and head basketball coach (1979-82)and since then has followed his dream to be a college basketball coach. He left his position as an assistant coach at Oregon University to become the head coach at Boise State University.

Jeff Kuhn – A 1978 graduate, Jeff was the 1977 WHBC Stark County Most Valuable Player. He shares the school career record for the most punts returned for touchdowns (4). He helped to lead the Leopards to a 1977 Federal League Championship and an undefeated season. He was a two-year first team All Federal League selection and All-County first team.

Ken Kuhn – He graduated in 1972. Ken earned 9 varsity letters at Louisville in football, basketball and track. He was the 1971 WHBC Stark County Most Valuable Player; first team All-Ohio, a captain in both the North-South and the Ohio-PA. Big 33 All Star games and a Scholastic Magazine National All-American. He earned a football scholarship to The Ohio State where he was a four-year letter winner and played on four Big Ten Champions and in four Rose Bowls. He played two year for the Cincinnati Bengals.

Mike Malcuit – He graduated in 1986 when he won the State Wrestling Championship in the 126-pound weight class.He had finished fifth in 1985 and runner-up in 1984.He was a three-time Sectional Champion and a three-time District Champion. He shares the record for most dual wins in a season with 22 in 1983-84.He holds one of the best career records of a Louisville wrestler with a 95-7-1 mark.

Dale McKimm – A 1959 graduate of Louisville, Nub spent his entire adult life serving as a volunteer in the Little Leopard program. He has been a coach, officer and administrator for forty-five years. He has been a benefactor to all the athletic programs at Louisville.

O.D. Miller – He was the founder and president of O.D. Miller Electric (1955-1989). He was a benefactor to all of the athletic programs at Louisville High School. He transported football equiptment, managers and trainers to away games for 32 years. He provided scaffold at away sites so that our football coaches could film games and his expertise for bonfires and pep rallies. He sponsored numerous Louisville teams in various sports for over 30 years.

Eben Butch Peer – He was a 1959 graduate of Louisville High School. Butch lettered in football, wrestling and track. He was active in the Little Leopards football program for 41 years when he served as a coach and administrator. He was an active member of the Louisville Touchdown Club and served as an emcee of the football banquet. He was co-chair of the 1988 Louisville School Levy Committee. He played football for and graduated from Muskingum College.

Bill Shalosky – A 1949 graduate, he was a three-year letter winner in football and a two-year track letter winner. He played on the 1948 undefeated Tri-County League Champions. He was a two-time first team Tri-County League selection and All County selection. He earned a football scholarship to the University of Cincinnati where he played for Hall of Fame coach Sid Gillman. He had his number retired at Cincinnati. He later coached football at West Point, LSU and South Carolina.

Denver Smith – He taught at Louisville High School for 27 years. He coached the boys track for five years and won four Stark County Championships. He graduated from Fairmont State College where he earned four letters in football and two in track. He is a six time National Masters Track and Field Champion in the Decathlon, and holds multiple national championshipsin the pole vault, pentathlon, high jump and triple jump. He has won the International Decathlon Championship multiple times at his age group and still continues to compete today.

Paul Starkey – He graduated in 1954.He was the Louisville Football MVP in 1953. He played football at Heidelberg College where he earned four letters. He was a career teacher, coach and administrator at Louisville High School. He was head football coach for The Leopards for twenty years. His record is 146-51-3. He won 8 league championships. He coached in the Ohio North-South All-Star Football Game and The Stark-Summit game.He is a past president of the Ohio Football Coaches Association. He also served as head wrestling coach for seven years. He is a member of the Ohio Football Coaches Association Hall of Fame and the Stark County Football Hall of Fame.

Mark Stier – A 1965 graduate of Louisville High School, he played on three Tri-County League Champions with the 1962 and 1964 teams being undefeated. He was Stark COunty Lineman of the Year in 1964 as well as All-County and All-Ohio. He earned a football scholarship to The Ohio State University where he was a three-time letter winner. He played on the undefeated 1968 Ohio State National Championship team and the 1969 Rose Bowl Champions. He was the team MVP and the Most Valuable Player of the 1969 Rose Bowl. He was named an Academic All-American.

Kerri Strobelt – She is a 1981 graduate. She earned three varsity letters in basketball and led her team to two Federal League Championships. She was named first team All-Ohio, first team Federal League and first team All-County. She led the county in scoring her senior season with 528 points when she was named Stark County Player of the Year. Her career scoring mark is 1,086 points. She went to Kent State on a full basketball scholarship and played on a MAC championship team and an NCAA qualifying team.